The newly formed Simcoe team entered the Vision Impaired (VI) Provincials being held in Oshawa, and lost in the finals to Team Kitchener who then won the right to represent Ontario at the 2012 V.I. Nationals held in Ottawa during White Cane Week.

After much practice, the team went to Ottawa to compete in the VI Provincials held at the RA Centre and won, defeating teams from Toronto, Kitchener and Ottawa. This gave the Simcoe team the right to play in the 2013 VI Nationals in Ottawa as Team Ontario. A designated sweeper, Amelie Beauchamp-Grandmaitre from Ottawa was added to the roster.

Team Ontario returned to Ottawa for the VI Nationals determined to prove to everyone that they could compete with the best. The team advanced to the finals where they defeated the reigning Team Canada from Kitchener. 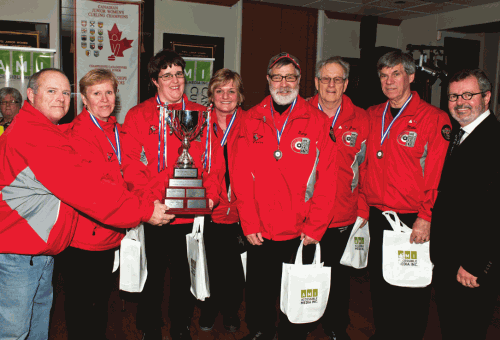 Returning home, local preparations began, as it was Simcoe’s turn to host the V.I. Provincials. Vision Impaired curlers representing teams from Kitchener, Toronto, Hamilton and Ottawa competed for the right to become the 2014 Team Ontario. Kitchener won their way to Ottawa as Team Ontario. We could not have held this competition without the amazing help and support from the Simcoe Curling Club staff, members, and generous sponsors. Everyone stepped up and went above and beyond to make this a most memorable event.

This year saw our return to Ottawa as the reigning Team Canada, and once again defeating Team Ontario in the finals. This meant that we would be returning in 2015 with the chance of a three-peat.

We defeated Team Alberta in the finals, a Three-peat !!

The summer of 2015 brought changes to the team. Due to health and personal reasons, it was decided to dismantle the team. The remaining team members playing out of Dundas, added new players, and returned to Ottawa as Team Canada, but were unsuccessful in retaining the title.

This year saw Mike Vrooman and Jim Simmons both joining Team Nova Scotia and helping them to win their first National title, defeating Team Ontario in the finals 7-2.

Both Jim and Mike returned to the nationals, and helped Team Canada (Nova Scotia) to the finals, losing to Team Alberta by the slimmest of margins. 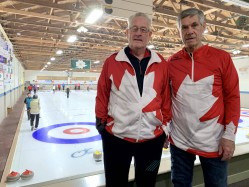