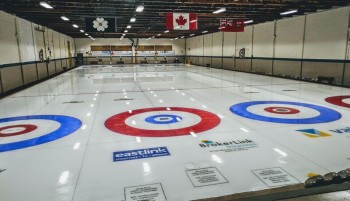 a member driven club located in Simcoe within Norfolk County, Ontario. Our facility includes four sheets of ice, a comfortable lounge area, a bar, and kitchen. Our 300+ members are proud to call this club home. From our Little Rockers/Youth Curling to our Learn to Curl League to our Competitive and Social Leagues there is a place for everyone at the Simcoe Curling Club. Our curling season runs from October to April.

The present day Simcoe Curling Club was founded in 1955, but curling has been part of Simcoe history since 1873. Head over to the club's history page to find out more.

The Simcoe Curling Club is committed to providing a safe and respectful curling environment for all members, guests and employees.

So what are we talking about…SCC strives to maintain an environment and facility which promotes a safe and healthy enjoyment of the game of curling – where all players benefit from good sportsmanship and respectful treatment to and from fellow members, allowing them to participate fully.

It’s up to Club Members to…. Communicate with Draw Committee, Membership Committee or Board Representatives if you have a concern about your physical safety, accessibility or treatment from other members.

It’s up to the Club…Concerns that are brought forward will be investigated in a fair and timely manner and the Club member will be informed of the findings and conclusions.

The Simcoe Curling Club has a long and fascinating history, a tapestry woven with the threads of vision, leadership, commitment, stewardship and sportsmanship demonstrated by the curlers themselves and the community at large.

The records show that the "roar" of curling began in Simcoe in 1873 when a group of hardy souls formed a club to curl outdoors on Sutton's Pond.  The "social" aspects of the game in that era were enjoyed at the Battersby House, declared by a visiting St. Thomas team to be "just immense and ahead of anything in any Ontario towns within 100 miles of Simcoe".  The Simcoe Curling Club joined the Ontario Curling Association in 1876. In those early years every curler possessed his own curling stones.  As a rule, the lead had the heaviest stone, the idea being it was harder to dislodge or remove this stone.

Ten years later the curlers moved indoors to an unheated drill shed near Young Street and played under oil lamps.  Conditions gradually improved for the curlers and by the early 1900's they were playing in the Simcoe rink which was electrically lit.  The club operated successfully until 1915 when curling was suspended due to World War 1.

Curling lay dormant in Simcoe for nearly 40 years despite several attempts to revive the club. At a meeting of the Simcoe Recreation Commission in 1953, it was decided to investigate the possibility of starting this sport again.  Organizational meetings were held in that year to form the present Simcoe Curling Club. The first executive of the modern-day club included B.W. Anderson as Honorary President, Peter Valachos, President and Horace Greenfield Vice-President.  Sixty-four members (including ladies for the first time), began curling in the Simcoe arena on January 24, 1954.  During the first two curling seasons, twenty-three handsome trophies were donated for competitive curling by local businesses and individuals.  Thus began the enduring sponsorships that have done so much to support the viability, vitality and curling achievements of the club.

1955-56 was one of the most important years up to this date in the history of our club. President Horace Greenfield and the Board of Directors was empowered to enter into an agreement with the Norfolk Agricultural Society whereby a building was to be erected on the Fairgrounds, by the above named society, to the specifications of the Curling Club.  Curling began in the new facility Saturday, November 5, 1955.  Thirty five dedicated members had signed $1,000.00 notes enabling the club to borrow sufficient funds for this project.  These notes were all retired by 1960.  At the opening of this fine new curling rink, tribute was given to the great amount of fund-raising, work and time given by members of the Club.  SCC operated with three cohesive units, namely: the Ladies Section, the Men's Section and the Mixed Section. A fourth section was added in 1978 when the Business Women's Section was formed.  The Senior Men's Section was granted a Board seat at the June 2000 Annual Meeting.

In 1964, arrangements were made with the Norfolk Agricultural Society to build an addition on the west end of the curling building to house the present-day lounge facilities.

In March of 1965 the first eight-ender at the Simcoe Club was won by Bill McDowell. Although others have gone un-recorded, Cliff Wingrove had one in 1968 and Mary Collver's rink pulled off the unique feat in 1976.

In 1966, the SCC obtained a liquor license thus legalizing the many happy hours spent discussing the finer points of the game.

1968-69 was the first year that a Simcoe team competed in an Ontario final.  The team was skipped by Horace Greenfield, with Don Butorac (Vice), B.Culver (Second) and J Woodrow (Lead).  Also that year, the club paid tribute to the late Francis M. Reid.  It was noted that "the amount of legal work done by "Red", as he was affectionately known, both during construction of our rink, obtaining our Charter etc. will never be known.  Some members have an idea of the number of hours he spent on our behalf.  Personally I will never forget the night he scored seven on the last end and won the game for his team."

In 1977, Harley Clark spearheaded a major project for the replacement of the entire concrete playing surface and associated brine piping.  This was made possible by a successful application to Wintario resulting in sponsorship of approximately $70,000.  President Meril Lotus was also ably assisted with this project by Angelo Basso ("construction supervisor"), in achieving this much needed up-grade.

In 1987 the SCC kept pace with the changing times by electing the first Madame President, Donna King.  The consensus - it was about time!

In the fall of 2000, another major project was undertaken in the "recoring" of all our curling rocks.  A survey conducted of the entire membership revealed that many felt the inconsistencies in the rocks accounted for frustration on the part of older and new curlers and that the rocks needed to be improved.  The "Rock Committee" was formed, chaired by David Wray and assisted by Keith deMontfort and Gary Ireland. Once again, an application was made to Trillium for funding, as the cost was approximately $19,000.  Trillium determined that the Simcoe club had to contribute substantial sum in order to be eligible for the Trillium award.  Club assets were not sufficient at that time, so a major fund-raiser was initiated by charging each member $50.00 in return for having their name engraved on a rock handle.  All rock handles were sold, contributing to the successful completion of this improvement in 2001.

In 2005, the community recognized an icon of local curling.  Horace Greenfield was inducted posthumously into the Norfolk County Sports Hall of Recognition. Horace was nominated for his curling prowess and "displayed a passion for the game and a tireless dedication to the mentoring of new curlers".

In 2009, a team led by Rob Inglis, approached Trillium once again with an application for approximately $100,000 in order to totally refurbish the ice-making equipment.  This major project was completed in 2010 and has not only enhanced and improved the ice making process but will ensure future energy efficiency.

2010 was an exciting year for two local visually impaired curlers from the Simcoe Curling Club.  Donna Hawkins and Mike Vrooman competed in Ottawa this past spring, their rink winning the Silver Medal at the Canadian National Blind Curling Championship competition.  Donna and Mike would like to pursue "the Gold" and put together an all-Simcoe visually impaired team.  This dream could qualify them for a future Paralympics.  Good Curling Donna and Mike!

The historical records demonstrate in detail, the on-going high level of curling and keen competition enjoyed by hundreds of members of the Simcoe Curling Club over the years at local, regional, provincial and now national levels.  The Simcoe Curling Club has actively and successfully engaged in many interclub exchanges and bonspiels.  High School students as well, demonstrated success under the auspices of the SCC. Currently students from local elementary schools are also enjoying the facilities of the club.

SCC has always been blessed with a wealth of dedicated members whose time and talents have been completely responsible for the success of the club.  Great credit is due to these willing and able people who enjoyed the facilities as much as the present membership obviously does.  Vision and long range planning will continue to identify priority needs for the club and its membership.

Sponsorship has and will continue to be a mainstay of the club and we applaud those businesses and individuals who have been faithful and generous in their support. All members, new and old should take advantage of every opportunity to express appreciation to our sponsors.

(We are indebted to Dr. Alex Grant who collected the history of the SCC until 1978.  He expressed special thanks to the late Bruce M. Pearce and staff of the Simcoe Reformer who provided many items of interest, particularly from the 1873-1896 era of the club).